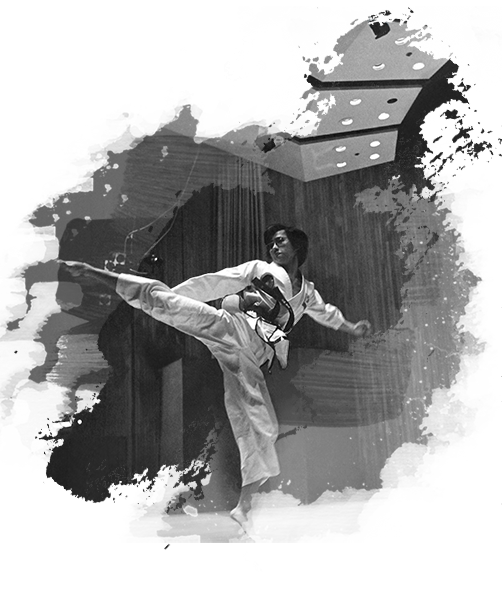 Grandmaster Jae Hun Kim was born and raised in Korea. His father, Mr. Jwah Kyum Kim, was a military officer who later became a diplomat and a cabinet member in the Korean government. Grandmaster Kim’s father served as the head of the Economic Mission to Vietnam, as well as the first Korean ambassador to Indonesia. He later returned to Korea to become a cabinet minister in charge of political affairs.

Although Grandmaster Kim’s father passed away in 1985, his presence is felt at our school as it was him, together with his son, who inspired and formulated the school tenets we abide by today: “Improvement of Mind and Body”, “Ethical Self-Conduct”, and “Unity Among Members (People)”.

As a young martial arts practitioner, Grandmaster Kim was drawn to the effectiveness and aesthetically-pleasing qualities of Taekwondo. While attending an all-boys high school of 2,800 students, he became further convinced of Taekwondo’s efficacy as a form of self-defence. There was always a “sparring session” going on in some part of the school, so you can imagine why Mr Kim appreciated the practical aspects of Taekwondo.

Moving to the West

In 1967, Grandmaster Kim moved to Winnipeg, Manitoba, Canada. It was there that he started his first Taekwondo club whilst working very hard as a full-time academic student. At that time, no one in Winnipeg knew what Taekwondo was, but those who witnessed it were no less than impressed. The club flourished, and eventually, Grandmaster Kim was able to invite a leading Taekwondo master, Mr Jung Tae Park, to move to Winnipeg and open a school together. Although Grandmaster Kim’s academic pursuits required much of his time when the new school opened, he continued to teach under Mr. Park’s guidance and learned from him. Today, Grandmaster Park is currently the president of the Global Tae Kwon Do Federation.

In 1979, Grandmaster Kim was selected by the USTU to coach the national team. After making numerous contributions to the advancement of Taekwondo organizations, Grandmaster Kim came to the decision to devote his remaining years to his own school and concentrate solely on teaching his students. He continues to teach every day even today, which is unusual for most Taekwondo grandmasters. Teaching is something that Mr. Kim enjoys tremendously, and he makes it a point to tell other instructors at the school that one should only teach Taekwondo if he or she thoroughly enjoys teaching all kinds of students – not only the talented ones but also those who are not as gifted.

Grandmaster Kim’s experience outside of the martial arts circle is also quite interesting. He earned a B.S. degree from the Massachusetts Institute of Technology (MIT) and an MBA from Harvard Business School. He also served in the Korean Air Force as a Captain. The academic training and skills Grandmaster Kim obtained from MIT and Harvard led him to a successful career with General Electric where he served for many years as Vice President (GETSCO), in the Northern Pacific Operations Centre. In that position, his chief responsibility was in the marketing of aircraft engines and aerospace products to that region of the world.

In 1992, Grandmaster Kim decided to return to his first love – teaching Taekwondo – on a full-time basis. He wanted to develop new instructors and to reach new communities, and provide good instruction where more people could benefit most effectively from Taekwondo training. The Jae Hun Kim Taekwondo Institute now has five locations in the greater Boston area (Ashland, Boston, Cambridge, Newton, and Quincy), Seattle, and international locations, such as in South Korea and Singapore. Grandmaster Kim received the rank of grandmaster in July 1993 from the Kukkiwon world Taekwondo headquarters in South Korea.